It’s now a common idea… when you’re planning a holiday in the Italian countryside, you think about Tuscany…..

…..But is Tuscany  really the best location to spend your holidays in Italy?

I’m Daniela Bucchi, “Your holidays in Umbria” Foundress, and during the last five years I’ve met more than 1057 tourists arrived in Umbria by chance, who have fallen in love with it, touring it repeatedly and even buying houses to spend as much time as possible here.

When they first came to Umbria they knew nothing about it, what to do or visit, what to eat or taste……

Thanks to my suggestions and advice, they discovered a land full of art, culture, tasty food and excellent wines.

They themselves gave me this useful information, real reasons that drove regular visitors of the beautiful Tuscany to move to Umbria and not to live it any more.

Summer season is around the corner!

Why should I choose Umbria, unknown to most of the people, instead of the famous Tuscany with its art, cuisine and wines?

This is the first question each guest asks me before making a reservation.

Here are 5 good reasons to choose Umbria, and it’s not just my personal point of view.

Let’s not waste time in idle talk any more, you may be very curious, so here are the answers I was given when I asked:

Why have you chosen Umbria instead of Tuscany?

#1 Umbria is much cheaper than Tuscany

This was the first answer in the 90 % of the cases.

You can enjoy La Dolce Vita country-style at the dining table of an Umbrian vineyard, eating white truffle pasta washed down with a nicely aged Sagrantino for half the price of the same in Florence.

Everything in Umbria is generally cheaper than in Tuscany.

You may rent a charming villa with a private swimming pool and a breathtaking view of the green Umbrian hills saving a 20-30% for the same in Tuscany.

I think this is quite enough to come and visit Umbria!

…. But let’s consider other aspects of this amazing region that is in no way inferior to the most famous tourist destinations in Italy.

Tuscany is popular for its excellent cuisine and high-quality wines, but also Umbria has its good ones.

Umbrian cooking is heavy on meat and game, as well as on big flavours such as truffles and porcini mushrooms

In Umbria you can eat fresh truffle all the year round, its woods are full of them.

In the summer taste the black truffle, less scented than the white one, but excellent for bruschette or for a large dish of Strangozzi.

In autumn try the precious white truffle with a heady scent, excellent on the top of a dish of Tagliatelle.

……Sorry! But Tuscany hasn’t got any truffles, if you find them in the shops, they come from Umbria or Piedmont.

In addition to the truffle, taste

Each Umbrian village or town has its typical dishes or products, made following specific directions, such as Torta al Testo of Monte Santa Maria Tiberina, or the Vinsanto of Citerna, or salami from the tradition of Norcia.

The peculiarity of the ground and the favourable microclimate make some products unique: the white potato of Pietralunga, the onion of Cannara, the lentils of Castelluccio di Norcia.

Simple products from old rural traditions, but if used with mastery, they turn into extraordinary and unique dishes.

One of the magical qualities of Umbria is that this is a place where a casual dinner can still feel like a life-altering experience.

Let’s talk about wines! From each medieval village, enjoy the sight of wide vineyards and olive groves alternating everywhere.

Umbrian wines are exclusive, the Sagrantino di Montefalco is the rarest and most famous Umbrian wine in the world.

It is made only from 100% Sagrantino grapes from Montefalco: the microclimate gives a peculiar flavour to these grapes.

A full-bodied wine to drink together with red or roasted meat and rich sauces.

Discover also the Rosso di Montefalco, made from Sagrantino and Sangiovese grapes, and the excellent white wines from Lake Trasimeno area such as the Grechetto or the Orvieto classico, from Orvieto vineyards.

True, Umbria doesn’t have the big set pieces of Florence and Siena, but it has a coronet of far more intimate and easily visited hill-towns  Perugia, Assisi, Orvieto, Gubbio, Todi, Spoleto……

If you love art, you can admire wonderful works without spending a cent.

Almost every Umbrian church is free to enter. And we are not talking bit-part, consolation-prize art either: some of central Italy’s finest paintings decorate the churches of Umbria.

In Assisi, St. Francesco’s Basilica is a place of pilgrimage for Christians and art historians.

Painters who worked in Assisi in the 1200s and 1300s include Cimabue, Pietro Lorenzetti, Simone Martini, and Giotto – the latter’s iconic Story of Saint Francis fresco cycle is in the Gothic Upper Church.

However, for just €10, you can buy the Perugia Città Museo pass; it gets you into the Galleria Nazionale dell’Umbria (one of Italy’s premier painting collections,  including Piero della Francesca, Perugino and a lot more), as well as into four more art sites in Perugia.

There’s also the same glorious pastoral scenery as Tuscany:  the olive groves, vineyards and cypress-topped hills  as well as high mountain landscapes such as the Sibillini Mountains.

Finally, there are qualities to Umbria beyond towns, truffles or cypresses.

Umbria mistica, mystical Umbria some have called it, or the Land of Saints, after the hundreds of saints born here, including St. Valentino and the two fathers of Western monasticism, St. Francesco and St. Benedetto.

#4 Manageable and straightforward to explore

Each town you visit has enough to keep you busy for a day or more, and none is more than a few miles from the next.

Choose your starting point and you can see most of the region’s highlights in a short time.

You can’t achieve that in the neighbouring Tuscany.

This is another important plus to choose Umbria instead of Tuscany!

It’s not only my opinion or my guests’ one, but also a recent research published in “Il sole 24 ore”, the most important economic Italian newspaper, has revealed that the Italian region where people live more happily is Umbria.

In fact the predominant colour in Umbria is green, it inspires quietness and balance, but also vitality and hope.

Let’s go to discover the perfect place for your next Italian Holiday!

A few years ago, Umbria was known, if at all, as Tuscany’s less alluring sister.

Not any more: nowadays Umbria, Italy’s “Green Heart”, is every bit as celebrated as its more famous neighbour.

The reasons are simple: the region has all Tuscany’s attributes and a few more.

Umbria is a noble land that is, at its core, also the salt of the earth. A high Etruscan civilization thrived here in pre-Roman times, erecting great cities and creating precious works of art before the first bricks were laid in Paris or London.

Also the singer Ed Sheeran has bought a house in Umbria recently, and the famous actresses Gwyneth Paltrow and Meryl Streep have been spending her holidays in Umbria.

Is this the poor man’s Tuscany? I can’t believe it anymore.

Tuscany’s well-worn Chianti Hills are so often billed as the most beautiful patch. But if your heart skips a beat there, pack your nitroglycerin and head for the preternatural Umbrian landscape.

It’s hard to put your finger on what sets Umbria apart, some quality to the light, a haze to the hills, a certain gentleness to landscape but once you’ve visited you’ll understand, and wonder how this varied and beautiful region ever languished in its neighbour’s shadow.

Umbria’s countryside is at its best in May, garlanded with flowers and spring green, and blessed with weather that is already balmy.

In September and October Umbria boasts a hilly panorama that’s an impressionist painting in autumn, with burnt siennas and mustardy yellow peppering the green of the vine rows and olive trees.

Umbria is something you don’t expect, something that surprises and leaves you dumbfounded.

Did you find this article interesting?

If you haven’t done it yet, help me to share it with your friends!

Let’s go to discover the perfect place for your next Italian Holiday! 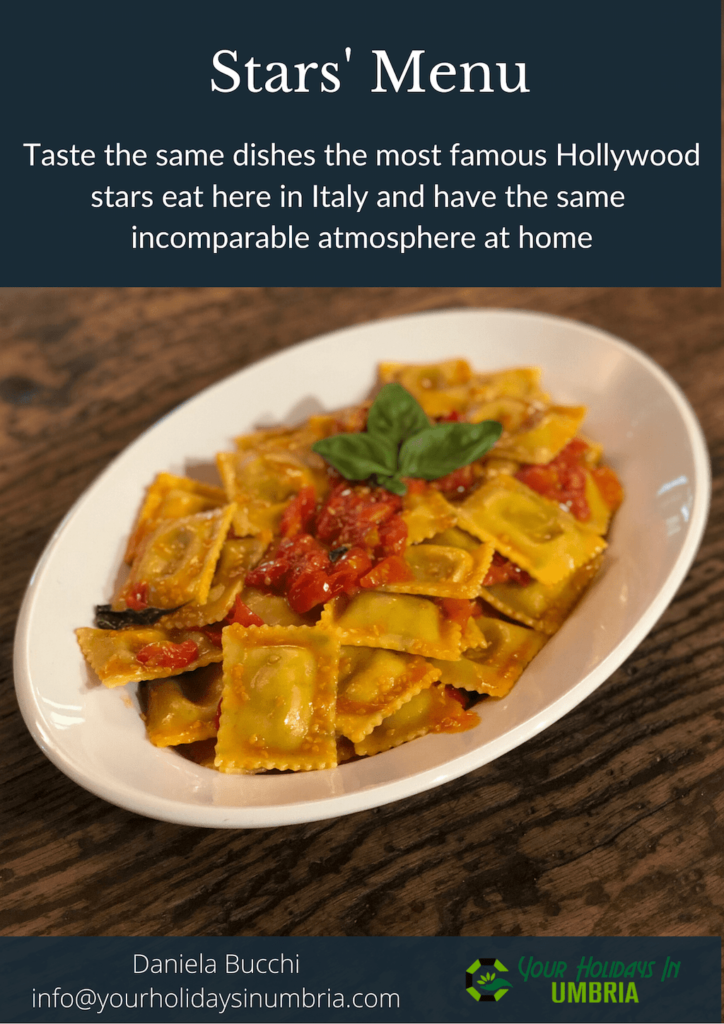 Contact me NOW for your best holiday in Umbria, Italy 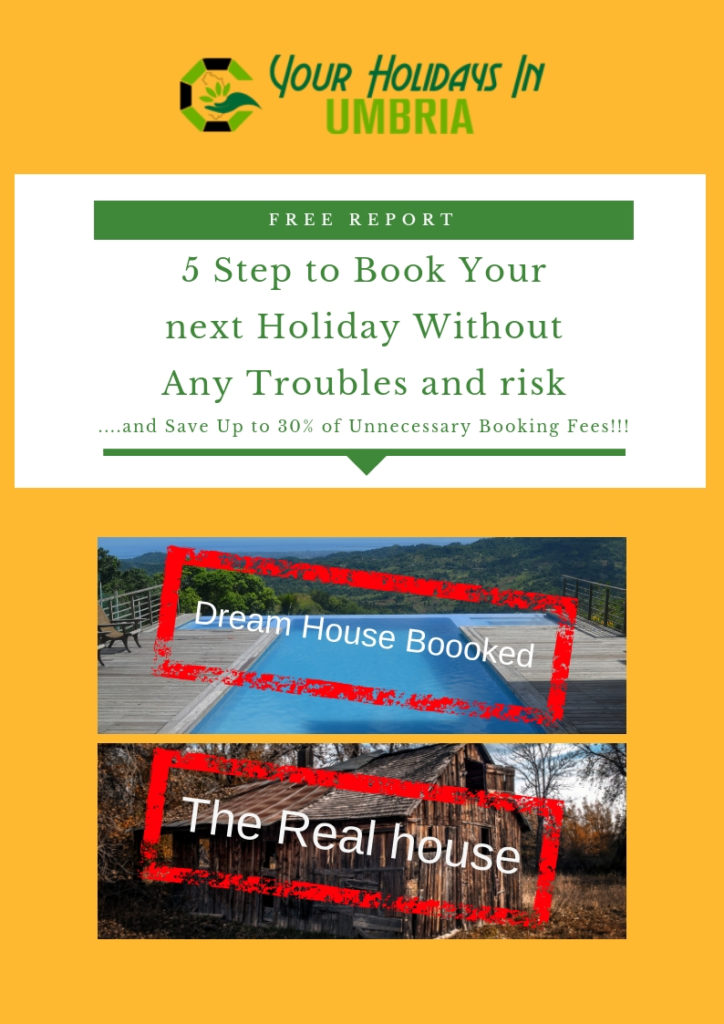